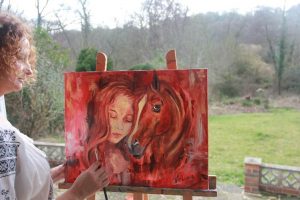 There is a horse riding school near the forest behind my house and when I go for a run I see these beautiful animals so peaceful and serene. They seem to be in tune with the landscape, not owning it like a panther, but being a part of it, respecting it. They are noble and beautiful animals and I spent hours admiring them and taking pictures of them.

Horses have been an inspiration for artists throughout history, from the stone age cave paintings to battlefield and hunting scenes during the renaissance, followed by horse racing, the American West and modern equestrian depictions. My favorite of all is the famous George Stubbs ‘Whistlejacket’, painted in 1762. Every time I visit the National Gallery, I make a point to go and see it for a few minutes and each time I’m in awe of its magnificence.

When I decided to paint horses, I wanted to research the symbolism of horses and the meaning associated with these sublime creatures in various cultures. We know in the West the horse is a universal symbol of freedom without restraint because riding a horse made people feel they could free themselves from their own bindings. There are many different connections one can make with having a horse as a spirit animal. Similar to the spirit animal of the Heron, the horse spirit animal reminds you to take care of your mental, emotional and spiritual well-being. Alongside this, the horse also symbolises freedom due to its naturally powerful and wild spirit. It always wants to break free. 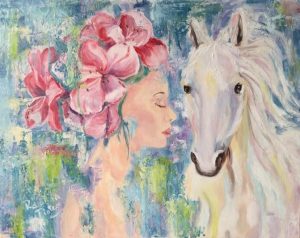 The meaning and symbolism of horses seek to remind you that you have the power and the motivation to carry through everything. You are full of vitality, and you have the freedom to do whatever you want.

Throughout Western civilisation, horses have been associated with power and war. Native Americans made horses an emblem of war as when riding horses they won more battles, had more land and were wealthier. Celtics believed horses to be good luck, and white horses to be sacred. Epona was the Goddess of fertility and is often depicted with horses so Celtics associated horses with female sexuality and empowerment.

Horses are also important to Eastern history and culture. The Bach Ma Temple is considered the oldest Temple in Vietnam, and it can be translated to ‘White Horse’ Temple. In the Philippines, the white horse is a symbol of a place called Pangantucan. They believe a white horse saved a tribe from a massacre. In Korea, white horses connote peace. A white horse emerged from the Heavens on a flash of lightning and bowed to a shiny egg, which birthed a boy. This boy grew up to unite warring states. In China, Horses are good Feng Shui, in the same way, that a horseshoe represents good luck in many western countries. Horses represent speed and energy whilst white horses represent success, fame, and freedom. White horses galloping together convey an increase in wealth. 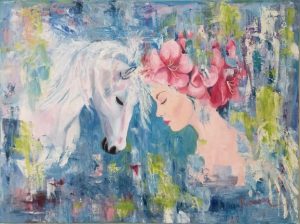 Horses are also important in China as they are the 7th Zodiac animal. They represent speed, freedom, and change. Those born in the Year of the Horse are full of energy, athletic and are focused on chasing after their dreams. They tend to have quickly changing emotions; they have short tempers but often forgive quickly. Women born in the Year of the Horse are beautiful and give off a refreshing aura. They can be gentle ponies on some days and other times can be wild stallions.

Horses have always had a spiritual connection with our being, especially with our feminine spirits.

I’d be interested to know what horses signify to you? Let me hear your thoughts. 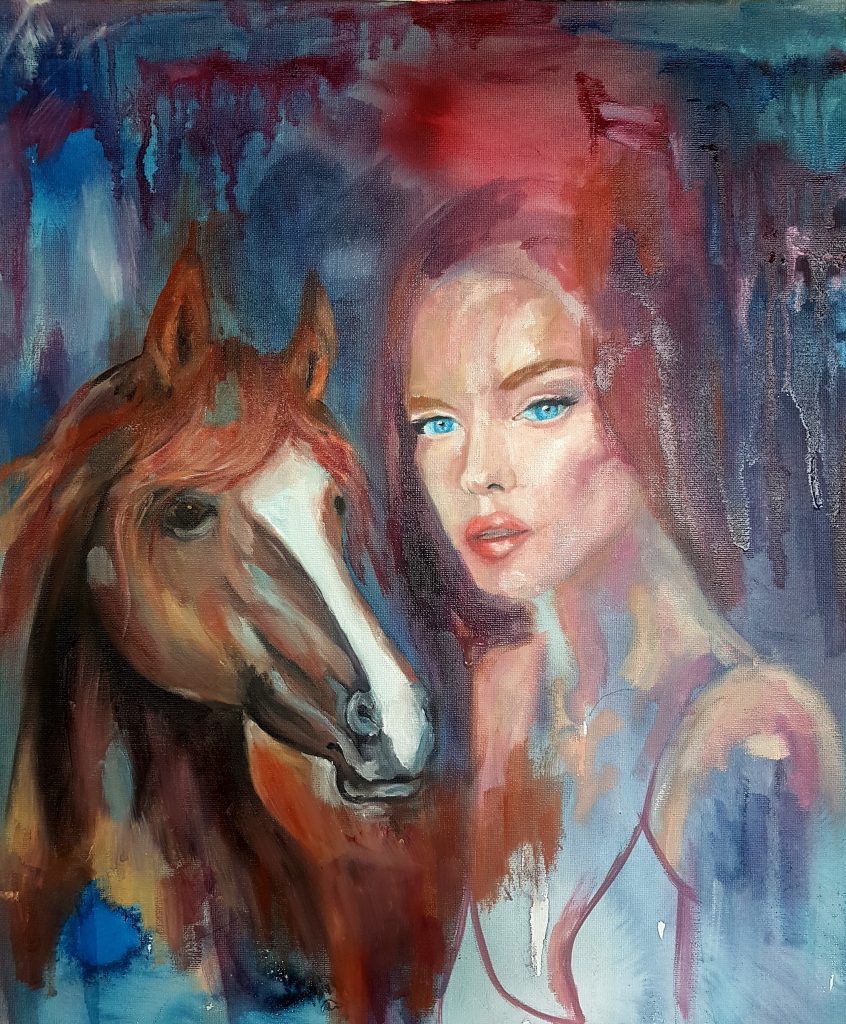